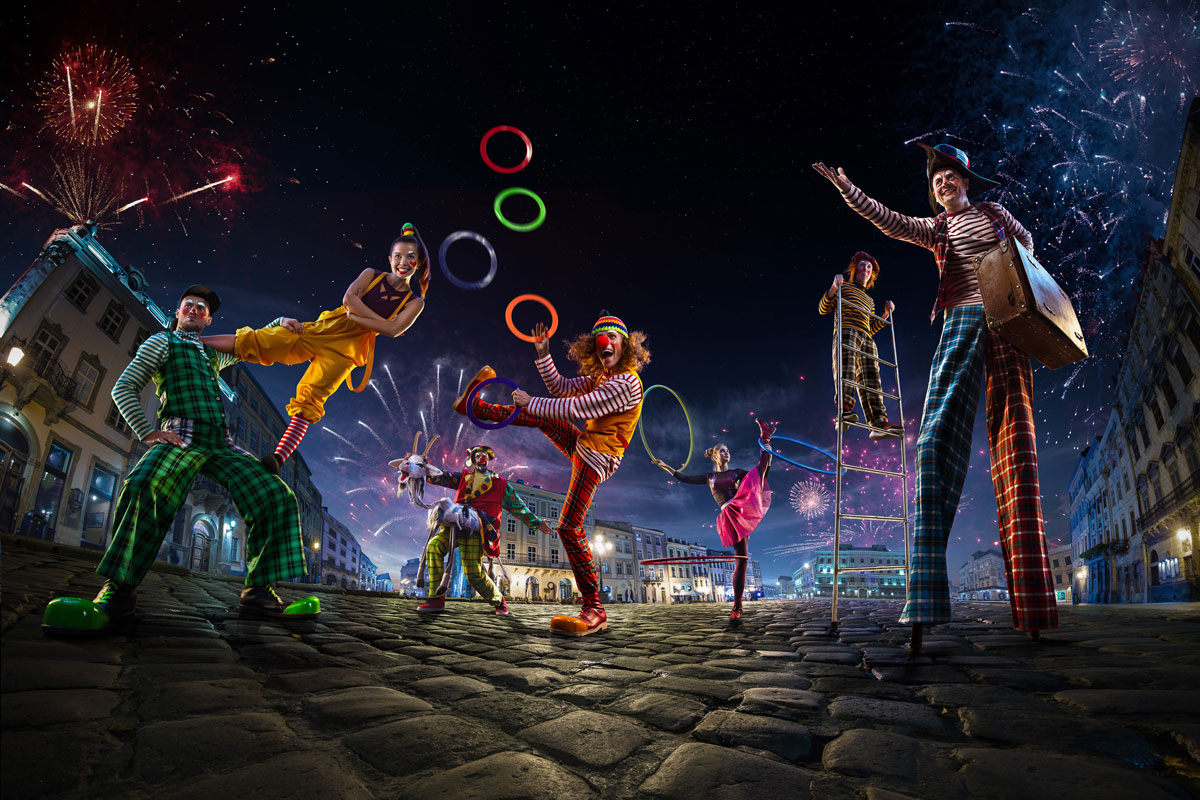 The production has been prepared as part of the Polish-Ukrainian cultural project in which the artists of Theatre Vuala (UA) perform next to actors of Kiev Street THeatre “Highlights” . The Clowning Exposure has been premiered on the the 32. Ulica International Street Theatre Festival in Krakow (PL), whose idea was to show the mutual relationship between the theatre and the circus. This is how the idea came to connect the theatre with the circus show.

The style of the show goes back to the primeval sources of clowning, which originated in ancient Egypt, and also contains some elements of the new circus, using dance, music, theatre, pantomime and even sports. It is a comedy full of magic, circus tricks, balancing feats, acrobatics, artistic gymnastics, dances on stilts and interaction with the audience.

The undisputed “star of the evening” was the performance of the Kiev Street Theatre Highlights and the Lviv Vuala Theatre from Ukraine entitled “Clowning Exposure”. Ukrainian artists delighted with beautiful costumes, perfection in acrobatics, juggling, and dances on stilts. They created a spectacle, the content of which perfectly reflects its title. We saw clowns in many scenes: heroes of fairy tales and legends, juggling, performing acrobatic stunts – also on stilts. We were captivated by funny, dynamic, but also lyrical scenes that make you think. And all at a good pace, with uplifting music (with recognizable fragments of famous classics and popular hits). Light, smoke, balloons and sparkling elements of costumes and scenery are the attributes of street art that Ukrainian artists use perfectly with great awareness. Therefore, it is not surprising that the audience from Jelenia Góra awarded them a long applause after the performance. 38. International Street Theater Festival in Jelenia Góra Urszula Liksztet, Nowiny Jeleniogórskie.

The Kiev Street Theater “Highlights”, already known to the Krakow audience, presented the show “Clown’s Stop” in cooperation with the Ukrainian Lvivki Theater. Amazing stilt walkers and actors in beautiful, elaborate costumes not only made them laugh or danced, but also told the story of a lonely harlequin and his little friend. Eventually, the Harlequin becomes a stilt walker through a magical transformation and finds love. In this spectacle, I was particularly impressed by the long and ingenious scene of a clash of chess armies.Joanna Marcinkowska, Dziennik Teatralny.

The entire last weekend, the very center of our city was full of theatrical ecstasies. The XXII edition of the Open Theater Festival came to an end. This unique event in the whole country every year enjoys unflagging popularity. On Sunday evening the event was highlighted by the spectacular and lively spectacle “Clowning Exposure” performed by the Kiev street theatre “Highlights” and the Vuala theatre from Lviv (UA). Moja Swidnica

Artists from Ukraine (Kyiv Street Theater “Highlights” and Vuala Theatre) presented a circus show entitled Clowning Exposure, showing a cross-section of circus and circus traditions from the beginning of the clown to the art of “cirque nouveau”. The performance used various forms of circus tricks: equilibristic performances, artistic gymnastics and dancing on stilts. The attractive choreographically and visually spectacle with beautiful music gave a lot of joy to both children and adults . 32. Międzynarodowy Festiwal Teatrów Ulicznych „Ale Cyrk!” Anna Małachowska, Na Scenie.info